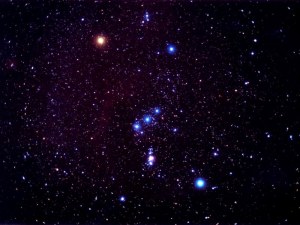 In the night sky, just to the west, are two bright stars, dazzling and dominant, unmissable despite street lights and rooftops. For days I’ve half-wondered what their story is – their names, what we know about them… For the first time in months the night sky caught my attention, demanded I put some effort into it.

In the process of finding out that I know next to nothing about astronomy, I stumbled across something that makes my scientific ignorance relevant to this blog. See, to navigate the night sky you need a starting point, and the only constellation I can immediately recognise is Orion. Punch that into a couple of astronomy-for-beginners sites and I found other things to look for – the moon, yes (I could manage that one), but also other constellations, like the Pleiades and…

Wait a minute, the Pleiades? Sure, I’ve heard of them in connection with astronomy, but aren’t they mentioned elsewhere? Two places actually – in a Red Hot Chilli Peppers song and in the Bible. Job 38 to be exact.

So I checked this out. It’s part of a long section where Job, having gone through some nightmarish times, seeks an explanation from God, whereupon God lets rip and points out that Job and his friends don’t really know what they’re talking about. This leads into an extended section proclaiming God’s greatness, including the following:

“Can you bind the chains of the Pleiades?
Can you loosen Orion’s belt?
Can you bring forth the constellations in their seasons
or lead out the Bear with its cubs?
Do you know the laws of the heavens?
Can you set up God’s dominion over the earth?

This isn’t the only time these constellations get mentioned – they also turn up in Amos 5:8. And while the writers use the magnificence of the night sky, the wonders of the cosmos to emphasise the sheer greatness of God their creator, something much simpler jumped out at me.

I can see Orion, the Bear and the Pleiades from my house. I go outside onto my drive, fire up a star chart app, and all three of those constellations are right above me, shining down on where I live.

That’s not a huge revelation, I know – the stars have been there for countless millennia and the same night sky is visible to pretty much anyone in the Northern Hemisphere. I’m not being startlingly original here. But there’s something awe-inspiring in the fact that Amos and Job and a man shivering in Dudley because he went out on a cold night wearing just a t-shirt can look up and see the same constellations. I guess it gives me a shared experience with people who lived thousands of years ago, a common humanity with writers from a different country, different culture, a different world almost.

And as those constellations are used to point to the glory and the power and the immensity of God, then I can look at them and be reminded that, while they’ve been around for so, so long, while the light I’m seeing was actually emitted thousands of years ago and so I’m looking into the past, the God they speak of is eternal, his character unchanging. Amos saw Orion in 750BC, I saw it in 2012, but we both went outside our houses, looked up, and thought of the same God. That’s amazing.

And, more amazing still, the same God looks back, in all his power and majesty, and says that he loves us.