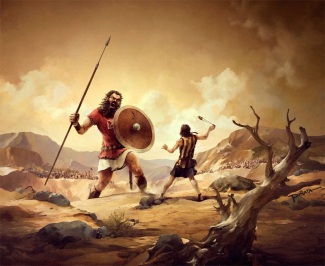 Who are you in that picture?

We often like to think of ourselves as David. He’s the plucky underdog who defeated a giant when no-one else had the guts or the faith to face Goliath. We like to see ourselves in his story; we face enormous odds, set upon by giants. We love a David and Goliath story, especially when we can cast ourselves as David.

But David didn’t stay there on the battlefield, a giant fallen at his feet. David got old, became king, became the father of a dynasty. And along with that he became complacent, an adulterer, a murderer. His successor is known for his wisdom; we’re less inclined to remember all those he forced into slavery.

Once David was a shepherd boy; then he became his own kind of Goliath and the kingdom deteriorated from that point forth. The same pattern emerges down through the centuries; the church in the west was the underdog until Constantine came along. Then we became legitimate and along came inquisitions and crusades.

We believe our own myth and inhabit the idea that we’re still the young boy with a slingshot going up against a relentless, enormous evil. We like to tell ourselves that even when by any realistic measure we’re loaded down with money and influence and nuclear weapons. If you’re bringing an aircraft carrier to the party, you’re probably not a David.

No, it’s Goliaths who trust in swords and power, and that’s a form of idolatry. “Some trust in chariots, others trust in horses,” says Psalm 20, “but we trust in the name of the Lord our God.” That Psalm’s attributed to David, who, near the end of his life, conducted a census to determine the size of his army. This is a man who genuinely loved and served God, but the temptation to become a Goliath is always present when power is involved.

Check your privilege. It’s become a bit of an internet cliche, but it’s worth keeping in mind. Maybe it’ll keep us from silencing genuine David’s . Because this much is true: if you have the capability to commit genocide, to unleash a war machine that can reduce cities and civilians to ashes, you’re not a David. If you can exert enough political power to get laws written in your favour, you’re not a David. If your church keeps you on a pedestal and in a mansion and thousands of people hang on your every word without question, you’re not a David. You’re a Goliath and you need to look at things differently. You’re not looking up at a giant; you’re looking down at a kid with a catapult.

Jesus could have acted like Goliath. His disciples even talked like that sometimes. But when they did, Jesus knelt and started washing feet. Out in the wilderness, he resisted the temptation to become a giant; unfortunately, plenty came after him to take that deal, and who blasphemously did it in his name.

David was a man after God’s own heart. There were times when that got obscured, when the boy with a slingshot and a reckless faith began to transform into a giant. There are times, when we’re blessed with resources and influence, that we run the risk of turning from saint to monster.

Lord protect us from that transformation.