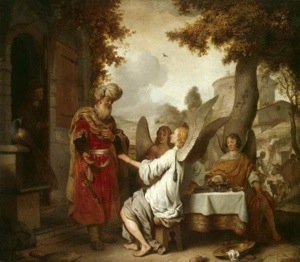 An old woman stands hidden at the flap of her tent. On the other side her husband and a group of mysterious visitors are having a discussion about children and legacies. Bitterness wells within her; married for decades, she’s never been able to have children and the only way for their family line to continue was for her husband to sleep with a servant. He has a son now, but he’s not hers… But wait, one of the strangers has just said something crazy and alluring and heartbreaking. He’s said that, within the year, she’ll have her own child. But she’s old and barren and feeling every one of her years, and so, when she hears this, all she can do…

It’s hard not to feel sorry for Sarah. For decades she would have heard how God was going to make her elderly husband the father of a great nation, but she might be forgiven for feeling on the fringes of that promise. From the moment we first hear of her, we learn that Sarah cannot have children. For a woman in that culture, childlessness would have carried with it feelings of shame and uselessness. She deserves some sympathy.

We’re not always giving that sympathy though. We think she should get with the programme, that she should trust God, even in the face of the impossible. She doubts the promise and we frown at her because we read the story with the beauty of hindsight; we know the stories of Mary and Elizabeth and Hannah. We know the stories of miraculous children.

This week I heard a question posed that made me reconsider how I’d thought of Sarah. The question was deceptively simple, a questioned to which I assumed I knew the answer. But, as we so often find with the Bible, the obvious isn’t always the truth.

So, the question: Did Sarah know she was part of the promise?

We assume she must be in on the plan because she’s Abraham’s wife and we know that sooner or later Isaac will be on the scene. But in the majority of God ‘s conversations with Abraham, in those promises where Abraham’s told that his descendants will outnumber the stars in the sky, Sarah’s name doesn’t come up.

Maybe this is where Hagar comes in. Sarah knows she can’t have children, knows that the family line needs to continue somehow. Hagar the servant is a convenient surrogate, and once she gives birth to Ishmael, maybe it felt like everything was sorted. Abraham finally had a son. Apparently the promise was fulfilled, leaving Sarah on the outside.

But here’s where it gets interesting. Because thirteen years after Ishmael is born, when the heir apparent starts to become a man, God reaffirms his covenant, this time emphasising Sarah’s role in it. She’s not on the outside, was never meant to be, but what’s Abraham’s reaction?

Laughing at God is something we scowl at, but let’s give Abraham and Sarah the benefit of the doubt. We forget this is still early in Genesis. We forget there’s no codified religion, no sacred writings, no Moses, no Messiah. There’s just an elderly couple carrying around a promise from a God who hasn’t yet delivered. They’re new to this; they have to learn to trust God.

Yeah, well, me too, and I don’t have their excuse. Trusting in God isn’t something I find easy; not the idea that God is trustworthy in general, I’m fine with that. It’s just that I, like Sarah, often feel on the outside of things. There’s no real rhyme or reason for this and lately the message has been coming over loud and clear: get over yourself and start trusting.

Anyway, one of the visitors, who turns out to be God himself, asks Abraham why Sarah is laughing. And maybe this reflects the patriarchy, but I have a little heresy; that Abraham hasn’t got round to telling Sarah about God’s promise and so this is the first time she’s heard that she’s a key player in the whole thing, that it ‘s her son who’ll be the child of the covenant, not the now adult Ishmael. And she reacts with apparent disbelief and maybe bitterness and, well, a little bit like her husband did.

She denies laughing, but God’s not fooled. And despite this she still ends up having a son within a year, still ends up seeing the miraculous. God comes through, even when it seems impossible, or simply just unlikely. And that’s a lesson Sarah and Abraham had to learn.

And there’s something about this whole episode that reminds me of an event that happened centuries later. A man called Nathaniel is sitting under a fig tree when his friend Philip tells him he’s met the Messiah in Nazareth Nathaniel scoffs – nothing good comes from Nazareth.

And yet not long later, Nathaniel meets Jesus, who’s well aware of his sarcasm, even though he wasn’t present.

“You believe because I told you I saw you under the fig tree. You’ll see greater things than that.”

Two people slowly encountering God, both receiving something of a rebuke but also a taste of God’s power and, perhaps more importantly, a promise that they’ll see great things very soon.