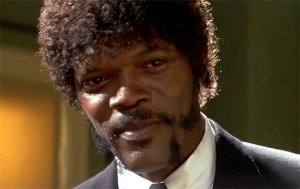 Okay, this is something new I wanted to try out on the blog. Let’s see how it goes.

The Bible is one of the foundational documents of western civilisation, and even though it’s not as widely read as it once was, you can still see its influence in culture. After all, it keeps cropping up in unlikely places, like metal albums and horror films. One of the most dramatic uses of a Bible quote in Hollywood is in Quentin Tarantino’s Pulp Fiction, where a passage from Ezekiel is used as both a hitman’s signature and a possible path for his redemption.

Of course, the main reason it’s dramatic is because it’s quoted by Samuel L. Jackson, who is possibly the coolest man on Earth, and therefore if he comes after you quoting the Bible you listen carefully. And then you run away, because he’s probably gonna shoot you.

At the risk of calling down his vengeance though, I should point out that he’s not quoting the Bible.

Oh, he says he’s reading Ezekiel 25:17, and in context I doubt anyone’s about to argue with him. But here’s what he says:

“The path of the righteous man is beset on all sides by the inequities of the selfish and the tyranny of evil men. Blessed is he who, in the name of charity and good will, shepherds the weak through the valley of darkness, for he is truly his brother’s keeper and the finder of lost children. And I will strike down upon thee with great vengeance and furious anger those who would attempt to poison and destroy My brothers. And you will know My name is the Lord when I lay My vengeance upon thee.”

But here’s what Ezekiel actually says:

The reason for the discrepancy is obvious – Tarantino wanted Jackson to say something awesome and biblical and wrote something that sounded right but that also helped advance the plot of the film. Straight forward enough, but as this blog only really exists to poke around in the Bible, I thought it was worth looking at a little closer.

See, towards the end of the film, Jackson’s character, who’s had something of an epiphany, explains why he quotes the Bible. He confesses that, in the context of the pseudo-passage, he’s been “the tyranny of evil men”, but he’s now trying to be the shepherd.

Now that’s interesting, because shepherds, good and bad, are a theme in Ezekiel. Flick forward nine chapters in the actual Bible, and you’ll see that Ezekiel 34 is an extended attack on the bad shepherds – leaders of Israel who are leading their people astray. That’s the problem with Jackson’s speech – the people meant to be shepherds have been dropping the ball, leaving one person to take over, God himself. Hence the other famous passage about shepherds alluded to in Tarantino’s speech, Psalm 23 (“The Lord is my shepherd, I lack nothing…even though I walk through the darkest valley, I will fear no evil…“). In other words, when religious and political leaders drop the ball, God himself takes up the slack. And that’s why there’s an emphasis in John’s gospel on Jesus being, yep, the Good Shepherd. We can also cross reference that with the Parable of the Lost Sheep in Luke, which is a parable of redemption.

I guess this ties in to the other famous story refered to in Jackson’s speech – “For he is truly his brother’s keeper” echos “Am I my brother’s keeper?” from Genesis 4. Here it’s a dismissive thing – Cain’s stroppy response to God asking where Abel is (the answer is that Cain’s murdered his brother and God’s about to bust him). There’s a sense in which the murder is only a part of Cain’s crime – in one violent act, he’s also shattered the bonds of family and community as well (possibly out of arrogance and an identity crisis). “Am I my brother’s keeper?” Well, yes, you are, and you’ve screwed up. To show his divorce from society, Cain ends up as a “restless wanderer upon the earth.”

That’s why the more aspirational use of the phrase in Pulp Fiction sounds right – it echoes the idea of loving your neighbour, of going the extra mile, of healing the wounds inflected by Cain. Jackson’s character says he’s going to “walk the earth” like another Caine (the guy from the show Kung Fu). Hmm.

So there you go; the quote version of Ezekiel may not be real, but it has echoes of the actual Bible, some of which tie in with the wider plot of the film. And it reveals another truth, less important but nevertheless cool: