It’s Boxing Day, traditionally a time of hangovers, indigestion and selection box chocolates for breakfast. The Christmas Day celebrations are over and now we’re in the limbo of pre-New Year. I can’t even remember what day it is.

That’s not entirely true. I remember it’s the Feast of St. Stephen, largely because of Good King Wenceslas and all that. Stephen is best known as the first Christian martyr, but he was also one of the first deacons, a post established by the early church to address inequalities in distributing food to the poor (basically Greek widows weren’t being adequately looked after, so seven deacons were put in charge of sorting this out).

Stephen’s martyrdom is important, but it’s also worth remembering his day job. Because two thousand years have passed and we still face issues of poverty and inequality and prejudice, still have people in our neighbourhoods and offices and churches who don’t have enough to eat, don’t know how to pay their rent, are one missed pay cheque away from desperation. And I’m blessed to not be in that situation, but that’s a position of privilege. It took the apostles a while to appoint Stephen and the others because at first they didn’t realise what was going on. There’s a lesson in that.

It’s also impossible to separate Stephen, the man who went down swinging in the faith, from Stephen the deacon called to care for the poor. Both sides of his story are rooted in the out-working of his beliefs. We sometimes get caught up in a false binary between good theology and right practice, but Stephen straddles both. It’s a good place to be, even when people start throwing stones. 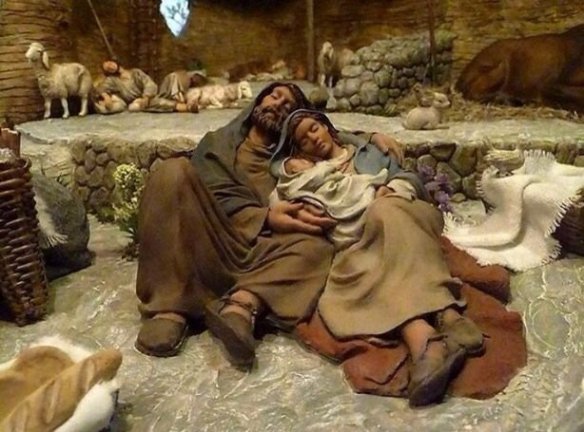 As the sun rises on this Christmas morning, as gifts are opened and food is prepared, may we join with the misfits round the manger: the teenage mother, the tradesman trying to protect his family, the blue-collar farm workers heading in from the margins, those who come from other lands with different clothes and different traditions, the angels singing protest songs.

May the coming year be one where we remember that all those Nativity scenes are a hotch-potch of pilgrims, where we fight against the division and prejudice and isolationism that is rife in the world and we break down the fences we’ve built around the stable.

And may that stable be a safe space for those who’ve been rejected.

And may that stable be a sanctuary for those who are fleeing oppression and persecution and hate.

And may that stable be a place of honesty to which we can bring our hopes and fears and doubts and reconstruction.

And may that stable hold a welcome for our true selves, our true identities beyond those forced on us by expectations and history and the prejudices of others.

And may that stable see our trauma, our grief, our anxiety, our depression, and give us a place to rest and heal and be real.

And may that stable be free from the whims of empire and media and politics and trolls.

And may that stable be a place of challenge and growth and learning and transformation.

And may that stable continue to summon and draw to it the forgotten, the marginalised, the abandoned, and may it make the invisible visible and the silent a choir.

And may this Christmas we recognise the hope and compassion and challenge and peace that arrives with the baby who lies in the manger, who draws to him the misfits and gives them a Kingdom.

So here I am at our carols by candlelight service. It’s the traditional format, readings and music, but I’m distracted. I’m watching the advent candle.

It’s the first of the four, and while the other three are burning bright, this one is struggling. It’s there – I can just about see the light from where I’m sitting – but it’s weak. And I’m staring at it, half expecting it to go out, half willing it to burst into life.

And there it is. Now it’s strong and alive, as bright as its brothers. This is what it should be, giving light, burning away the shadows.

But as we stand for the opening notes of We Three Kings, the candle seems to falter, fade, grow faint. What’s going on?

As I sit down I realise – it’s not the candle, it’s where I’m sitting, it’s my perspective. Because it’s dark, and my eyes aren’t great, and it’s taken me ’till now to realise there’s a mic stand in the way, blocking the light. The flame is still strong, but there’s stuff in the way. I feel ridiculous, briefly, but then I remember all the weeks in Advent when it’s been a struggle to get that candle lit. Three days before Christmas and things seem to be sorted, but that’s not saying it hasn’t been a journey to get here. The lights go up at the end of the service and everything becomes clear but somehow it’s anticlimactic against the struggles of that candle, real or imagined.

Is there a moral to this story? Who knows. It wouldn’t be the first time I got distracted by a misunderstanding. But halfway through the service, I did a sneaky Google that might be something of an explanation. That first candle of the advent crown?

Tonight will be the longest night, the night we’re furthest from the sun (here in the northern hemisphere at least). It’s cold, the darkness draws in, and astronomy becomes metaphor. We cycle through the season, springtime and harvest, summer and winter, but we can be wary about that awareness – what if the spring doesn’t arrive, what if the nights don’t get shorter, what if, what if, what if… It sometimes can feel like the night will go on forever, with the dawn nothing but a cruel mirage. Maybe this sounds like hyperbole. Maybe it sounds like truth.

It’s here that I say that things do get better, that you’re stronger than you think you are, even when you don’t believe that. The nights get shorter, a bit more light every day. But there are times in the year that give us reasons to pause and acknowledge that sometimes things are hard, that there are those who would have been here who aren’t, that there are broken things and broken hearts, that at this time of year the music of Slade and Mariah can get drowned out by the noise of war drums, of scapegoating, of contemptuous polemics. We can’t move on without acknowledging grief and sadness and loss.

“Every worship group should have a break-up song.” I can’t remember who said this, other than they had an Irish accent, but they were right. We like to talk of hope, of faith, joy; we’re less interested in talking about doubt, of sadness and trauma, of depression and despair and disappointment, as if these were two binary choices rather than different facets of the messiness of life.

In some traditions, today is a day to acknowledge and make room at the inn for sadness, for loss, of worry. The Nativity contains all these things alongside the hope and hallelujahs. Blue Christmas creates a space to recognise hurt and all we’ve lost. And maybe it’s appropriate that it coincides with the Feast of St. Thomas, the doubting disciple, the one who had to wait for a glimpse of hope, the one who embodies both cynicism and faith.

Because if we celebrate Blue Christmas tonight, it’s in the context of the days getting longer, increments of hope. Things can change, not because that’s an inevitability, but because we can look after each other, weep with those who weep, dance with those who sing. Sometimes, on the darkest night, God can seem far away, but that’s just an invitation to see him reflected in those around us, churches and communities as stars in the depths of the dark, candles raging against the night, a reminder that we’re still in advent, that Christmas is around the corner, that someone, somewhere, needs and wants you to be here tomorrow, next week, next Christmas.

We have a weird angel hanging on our Christmas tree, a monobrowed herald of the birth of Christ. He’s smiling, I think; that or grinding his teeth (which may be why he appears to be missing one). He’s also bald, which you don’t often see in angels.

My eldest son made this angel at school, and while it’s not exactly in the tradition of Christmas iconography, I like that we’ve got a kinda odd looking angel lurking among the fairy lights. We can sanitise Christmas too much, hiding the dirt and the worry and the scandal: Mary is beatific, the kings are regal, the animals are clean and the angels are blonde. And while that makes for a pretty Christmas card, it doesn’t help the idea of Jesus as Immanuel, God with us in reality, not iconography.

Because Mary was an unmarried mother about to give birth in a cave. The wise men were astrologers, the shepherds were despised, and sitting on the throne was a puppet-despot with death squads waiting in the wings. The heavenly host appeared in the sky and sang a song designed to stick two fingers up at the most powerful man in the world. The Nativity is messy and inclusive and radical, and it’s easy to forget that. I do it all the time.

So our ugly angel is a reminder; a reminder that Immanuel is with us – the misfits, the fearful, the depressed and the broken, survivors and addicts, the sinners and those who struggle to be saints. He’s in churches and cathedrals, sure, but also in doorways and shelters, hospitals and prisons, foodbanks, AA meetings, care homes, street corners and with the neglected and the forgotten and the over-looked and the hated. Our Christmases have to reflect that, otherwise we’re missing much of the point.

Our angel doesn’t have a name, but after a bit of quick Googling, I’d like to propose Adriyel – Of God’s Flock. Because that flock contains multitudes – all races, all tribes, all identities, all abilities, all appearences. That flock is bigger and stranger and more complicated than we give it for, and if Adriyel can be a reminder of this, then he has a place on our tree, a reminder that Christmas should be a time for weird angels.